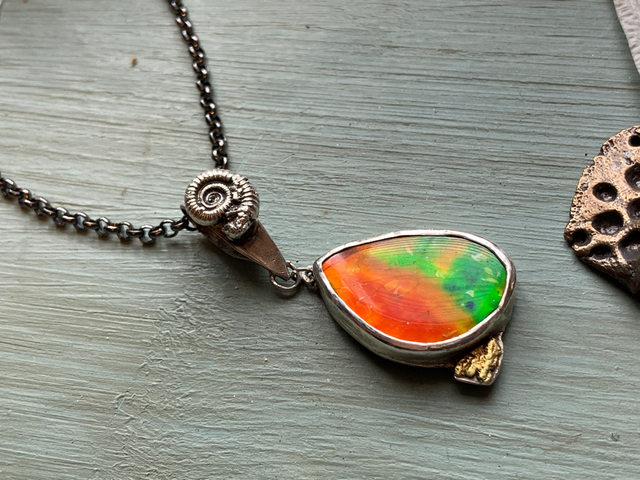 SKU:
$453.00
$350.00
$350.00
Unavailable
per item
An extraordinary specimen of ammolite, which is fossilized mother of pearl from the shell of an ammonite.
Paired with a gold nugget from Idaho, set in sterling silver, and accompanied by a silver ammonite bail, to tie the fossil theme together.
Ammolite is generally graded on color, flash, and whether or not the surface of the nacre is crackled or not. While I happen to like the crackled fossils as well, uncrackled stones such as this one are uncommon and sought after.
1.8” including the bail, on an 18” gunmetal chain.
Ammolite is fossilized ammonite nacre, or mother of pearl. Ammonites were ancient cephalopods that prowled the ancient seas worldwide, and survived several extinction events over the ages. Ammolite is an astonishingly beautiful fossil, owing it’s spectacular color and flash to inherited microstructures. It is found only on the eastern slopes of Alberta’s rocky mountains, in the Bears Paws formation (late Cretaceous period).
1 available
Add to Cart